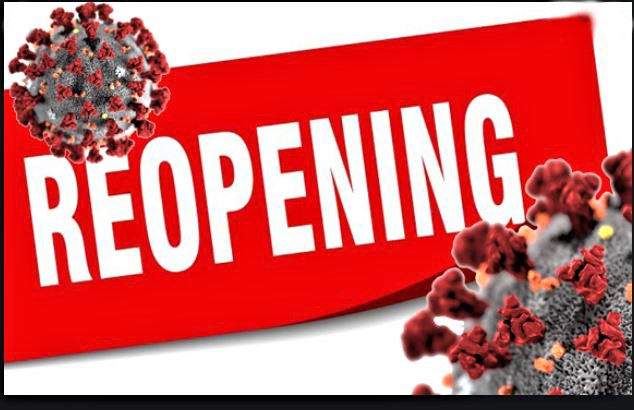 In March, the public was told that closing of nonessential businesses and stay-at-home orders were necessary to ‘flatten the curve’ for Covid 19 cases and deaths.  Besides saving lives, flattening the curve was thought to be necessary as computer models predicted that our hospitals and emergency rooms would not be able to treat all the people necessary.  Along with stay-at-home orders and mandatory business closures, emergency hospitals were built and Navy hospital ships were dispatched to New York and Los Angeles.

This is a long blog that will provide the basis for the observations:

It is critical that people continue to social distance, wash hands regularly and wear masks in crowded areas or in enclosed spaces.

After months of enduring business closures, travel restrictions, stay-at-home orders, and the stoppage of nonemergency medical care,  the ‘curve’ has flattened.  It is difficult to make hard conclusions based on the number of reported cases as the total number of tests are going up daily, so it is difficult to tell if there is an increase in the number of reported cases because more people are getting infected, or if the increases are simply due to running more tests.  However, the number of deaths and hospital utilization are two better assessments of how we are doing against covid 19.

On 5/23/2020, there were 98685 reported US deaths attributed to Covid 19.  Note that this number is an estimate.  Several states have revised their fatality reports to lower the number of deaths due to covid 19.  This was done to separate those patients who actually died from covid 19 from those patients who died for other reasons, but tested positive for covid 19.

A granular look at the data shows that New York and New Jersey account for 41% of these deaths even though they only have 9% of the US population.  They are clearly not behaving like most of the other states.  The states with the 4 highest deaths/million people are:

These 4 states account for 50% of the total US deaths and represent 12% of the population.

It is also reminded that 7 states did not have a statewide ‘lockdown’ and stoppage of businesse.  These states were Arkansas, Iowa, Nebraska, South Dakota, North Dakota, Utah and Wyoming.  All of these states have a low number of cases and mortality rates in comparison with the other states.  These states did close selective activities such as schools, tattoo parlors and gatherings of more than 10.  However, other businesses were allowed to stay open and follow CDC guidelines for social distancing, masks, etc.

There has been no significant increases in deaths or hospitalizations since Georgia, Texas and Florida began their phasing in plans for reopening businesses in the beginning of May.  The following charts shows that overall, the number of daily deaths is decreasing.  The ‘curve’ is definitely flattening.  The reopening of businesses has NOT resulted in an increase in the effects of covid 19.

The 5 states with the highest number of deaths are:

There were 7 states that did not have statewide shutdown of nonessential businesses.  These states did shut down schools and limited crowd sizes.  Some selected businesses were shut down, but, by in large, businesses were allowed to decide whether to follow health guidelines and stay open.

Texas began it first phase of business opening on May 1.  The daily deaths from May 1 to May 14, appear to be about the same as between April 14 and May 1 (before the reopening of business).   As reported in a blog about New York, the distribution of cases through Texas varied greatly.   There are 254 counties in Texas that have reported a total of 1527 deaths on 5/23/2020.  However, like in most states, the covid 19 cases are not evenly distributed around the state.   Three counties (Harris, Tarrant, Dallas accounted for 40% of the cases and 53% of the deaths.  7 counties account for 60% of the deaths. 153 counties have reported fewer than 50 cases and less than 10 deaths.  If you live in Texas, it makes a difference where you live.

Texas has a reported deaths/million value of 46.  This ranks Texas 40th in this category.  (NY is first with 1446 deaths/million).  The following graph indicates that the average deaths/day in Texas has been decreasing for the past week, even as more businesses open.

Florida has reported a total of 2233 deaths.  Like Texas, 3 counties account for 54% of the deaths.  Similarly, the data looks similar for Florida after the beginning of phase 1 opening on May 4.  The following graph shows the 7 day average of deaths/day is the lowest it has been since the early April.  Florida reports a fatality rate of 91 deaths/million.  This ranks Florida 28 out of 50.

It is interesting to compare this data against 3 states who have maintained stay-at-home and business shutdown orders.  These states have announced that they will maintain their stay-at-home orders for another month or more.

These values are comparable to those states that have begun to reopen businesses.  Again, it is reminded that these are averages for the entire state.  Within each state, there are a few ‘hot spots’ that have a higher number of deaths and there are many more areas which have very few deaths.

The number of covid 19 patients being hospitalized is decreasing in most areas.  It is important to remember that a large factor in issuing mandatory business shutdowns and stay-at-home orders was to avoid overwhelming the healthcare system predicted by computer models.  Fortunately, the models have been largely incorrect.  There have been no reported cases where a patient could not be admitted to a hospital or have access to a ventilator if needed.   Emergency hospitals set up in New York, Louisana, and California were essentially not needed.  The hospital ships USN Comfort in New York and USN Mercy in Los Angeles received very few patients.

At the current levels, even if there is a modest increase in cases due to business reopening., there appears to be sufficient available space in hospitals.

Early assessment of business reopenings.  The early indications are that there has not been a significant increase in the number of cases, deaths or hospitalizations in Georgia, Texas and Florida.  Those 7 states that did not have business shutdowns or stay-at-home orders continue to exhibit low numbers of infections and deaths.

In each of these states, there are definitely ‘hot spots’ that still have high numbers of infections and deaths, but the majority of the states seem to have decreasing number of cases and deaths.  How these states are managed will determine the success reopening.  Each state must establish a plan that reflects the level of infection and fatalities of local areas.  This means that not all parts of each state will be operating under the same guidelines.   ‘Hot spots’ must be reopened more carefully and monitoring will be key.

When businesses open, it will be the people that determine the success of reopening.

People must continue to wash their hands regularly.

If you are feeling sick, don’t go out or go to work and don’t; come into contact with anyone.

Wear a mask if you are an enclosed space particularly if you can not maintain social distancing at all times.

The indications are that businesses can safely open if people remain vigilant and follow the guidelines.

The ‘curve’ has been flattened and the hospitals are not overwhelmed.  Given that these were goals of the shutdown, business reopening should begin cautiously and the people must be responsible for their own actions.