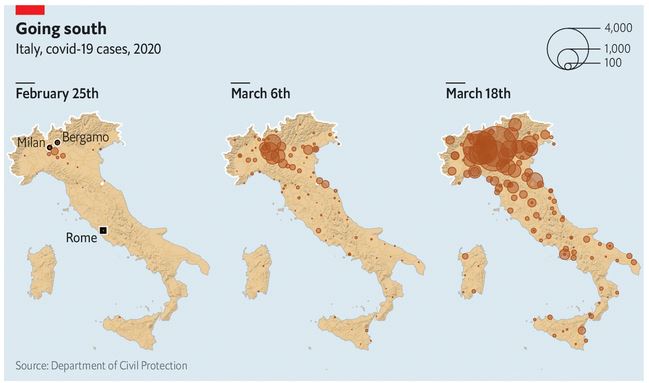 Italy has recorded the highest number of Covid 19 deaths (15887) in the world.  It also has the second highest national fatality rate of 263 deaths/million people.  This in comparison to the US which has has 9652 deaths and a national fatality rate 29 deaths/million people.  It is not completely clear why the Italian and US experience is so different.  It is likely that the virus was spread during the 3 week period from the first detected case to the date that a nation wide quarantine was put in place.  Restaurants and bars remained open for another 2 days after the national quarantine was announced.

As of April 6, there has been a decline in the number of deaths for 3 straight days.  It is hoped that this signals that the ‘peak’ of the infection has passed and that quarantine efforts are having an effect.

Here is a timeline of events in Italy.

The first 2 cases of Covid 19 were made on Jan 31, 2020 when 2 Chinese tourists in Rome tested positive.  On the same day, Italy suspended all flights to and from China.

In February, 11 municipalities in northern Italy were identified as infection centers and placed under quarantine.

February 23.  Additional specific towns are placed under quarantine.  Carnival celebrations and some soccer matches were cancelled.

March 4.  Schools and university were closed but there were now over 3000 known cases.

March 8.  Quarantine expanded to all of Lombardy and 14 other northern provinces.

March 9. Quarantine exteded to all of Italy.

March 11.  All bars and restaurants closed.

March 22. Factories are closed and all nonessential production is halted (59,138 cases).